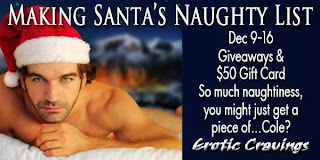 There’s no way one of my Spy Games heroes would escape Santa’s Naughty List. Their penchant for sharing women teamed with the notches on their collective bedposts and Jake’s love of whiskey have pretty much grounded Chase and Jake from the Nice List for eternity. Sort of like breaking a warehouse full of mirrors and you’re out of good luck. All three men love sex and strive to take it to the next level and see how many multiple orgasms they can give their partner. With the holidays coming up, I’d hate to be the one to find them a present. They are rich men who can afford the finer things in life.

So what do you give the spy who has everything for Christmas? A Boink Box, of course!

So far I’ve only mentioned that Chase and Jake are naughty… Well, Aaron may have been on the Nice List for most of his life, but he’s bent on brewing up a whole batch of naughty with Charlotte’s help. The excerpt I chose is one of my favorite scenes from the beach, at night. Aaron has decided he’s going to win a contest, with Charlotte’s help. He just has to convince her it’s going to be worth the effort. 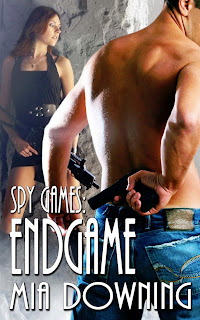 Sexy spy Charlotte Smith doesn’t go by the code name Dragon Queen because she’s sweet and cuddly. She’s cold, hard, and mean and has been training for the past five years to take down the men who destroyed her soul and left her burning for revenge. But when she meets her next assignment at a wedding, her body protests there’s much more to life than kicking asses and taking names. Actor Aaron James is witty, hot as hell, and he smells divine. But women with suicidal endgames don’t indulge in casual sex, and they definitely don’t fall in love.

Since meeting Charlotte at his brother’s wedding, Aaron’s life has been nothing but trouble. He’s plagued by memories of the kiss he stole from her, and he senses underneath her aloof nature and frosty glare is a woman with passion and fire. When Charlotte is assigned as his bodyguard after a botched kidnapping attempt, he’s psyched. What better way to get in her panties than have her pretend she’s his girlfriend? Until Aaron realizes too late he wants more than in her panties… he want’s Charlotte’s heart.

“Let me fuck you with my hand. Here, on the beach.” Aaron slid his fingers inside her tight, wet pussy and pumped as much as her pants allowed. “I should have asked you to wear a skirt and no panties.”

Charlotte couldn’t believe she was letting him fingerfuck her on a beach like she was someone’s girlfriend. His girlfriend. She trembled as he slid her panties and pants down just a bit, so there was more room for his hand. Or rather, hands, because the other delved in to rub her clit and explore sensitive folds.

He removed a hand from her pussy and sucked on one finger, then two. And sighed. “They could bottle this— your taste— and men would never need erectile dysfunction aids ever again.”

Aaron dropped his voice to a conspiratorial stage whisper. “We’re going to break a record, baby.”

Fear tangled with desire in the pit of her stomach. “I don’t want to know about this, do I?”

“Of course you do. I need you.” He sank his fingers deeper into her pussy. “We’re going to break the Anderson record.”

“How many orgasms I can give you before I shoot the moon. Come.”

“Your brothers have discussed this?” Good gravy, Anderson men were pigs. Or… well, the ladies were the lucky ones. So she had no clue what to call them. “And the record is?”

“They’re all stuck at three. Chase included. He’s an honorary Anderson, I guess.”

It should worry her that she knew exactly how many multiple orgasms Kate and Tia had gotten from her two favorite men, but what bothered her more was the end result. She’d never had a multiple orgasm. Ever. She sucked in a breath. “You want to give me four.”

“I was never one to back away from a challenge. So you game? We haven’t gotten one out of the way, and you need clitoral stimulation to get there. So you come, here, we go home and practice the oral route, then…”

Spy Games: Endgame is available at…

If you haven’t started the series yet, now’s the time to hook up with some sexy spies for the holidays!
Spy Games: Trained for Seduction (Book 1) (m/f/m) 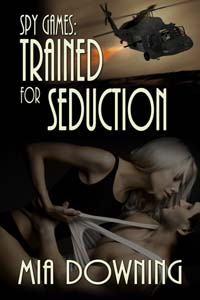 Emma Walters didn’t choose to be a spy, but when her crazy father was caught selling bombs to the wrong people, she was given a choice–become a spy or rot in jail. Her exciting new life as agent Kate Wells becomes more so when she discovers her new boss is the agent–undercover and investigating her father at the time–who took her to third base. Emma is already half in love with the dark and dangerous Chase Sanders. Kate wants nothing more than for him to finish what he started, but he’s the devil incarnate. And one doesn’t make deals or fall in love with the devil.

If someone had told Chase he’d fall in love with a certain virgin when he was on his last mission, he would have shot them dead, sniper style. She was nothing more than collateral damage, damn it. But watching the sexy new spy morph into a bombshell killing machine is too much to bear. So when the powers that be command him to train her in the art of seduction for her first–and possibly last–mission, he’s scared witless. Making love to Kate means preparing her for sex with another man. Somehow, Chase has to find a way to get Kate in–and out–of her mission without dying. And without falling in love.

Available in e-book or print

Connect with Mia Downing on the Web!

2) Fill out the Rafflecopter thingie and submit

3) Wait eagerly to see if you’ve got yourself a lump of coal…or a piece of Cole (he’s mighty fine, that guy on the banner.)

4) Void where prohibited, legal where it ain’t, and please be 18 or over!

Thanks for stopping by!

This site uses Akismet to reduce spam. Learn how your comment data is processed.